During the Covid-19 pandemic, Crystal Springs will be following all state ordinances - Learn More
By Crystal Springs
Posted June 7, 2018
In Thirsty Thursdays
0
0

In late 2017, Kim Sturdavant, brewmaster at Social Brewing in San Francisco, had an idea to reduce the natural bitterness found in IPAs. He combined light malts, fruit-forward hops, and an amylase enzyme- typically used in stouts and porters to lighten the body without reducing alcohol content- and what resulted was an extra dry IPA, which, being near the heart of California wine country, he dubbed Brut IPA.

A Brut IPA is all about the flavor of the hops, and offers an alternative to the strong bitterness of typical West Coast IPAs and the haziness of New England IPAs. Brut IPAs are crisp, clean, and bubbly, which makes them a refreshing choice for warm weather.

The Crystal Springs Brewing Company Brut IPA, named “I am Brut,” uses a combination of Nelson Sauvin, Citra, and Mosaic hops, Pilsner malt, and flaked corn, as well as the added amylase enzyme to reduce bitterness. The result is a very dry, easy drinking IPA with tons of hop flavor but very little bite at about 52 IBUs. At 6.8% ABV, I am Brut is deceptively drinkable.

We think it will grow on you. 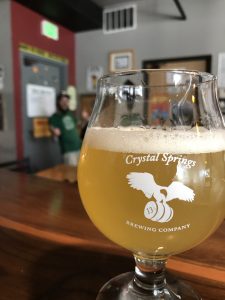 I am Brut is Fonz approved

Send us an email and we'll get back to you ASAP.